You can download the digest in PDF format here: RRN Research Digest No. 117 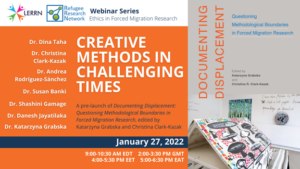 Souter, J. (2022) Asylum as Reparation: Refuge and Responsibility for the Harms of Displacement (Palgrave-Macmillan). This book argues that states have a special obligation to offer asylum as reparation to refugees for whose flight they are responsible. It shows the great relevance of reparative justice and the importance of the causes of contemporary forced migration for our understanding of states’ responsibilities to refugees. Part I explains how this view presents an alternative to the dominant humanitarian approach to asylum in political theory and some practices. Part II outlines the conditions under which asylum should act as a form of reparation, arguing that a state owes this form of asylum to refugees where it bears responsibility for the unjustified harms that they experience and where asylum is the most fitting form of reparation available. Part III explores some of the ethical implications of this reparative approach for the workings of states’ asylum systems and the international politics of refugee protection.

Special Issue: Involuntary Migration, Inequality, and Integration: Vietnamese and Afghan Migrants in Canada, Germany, the U.K., and the U.S., Journal of Ethnic and Migration Studies, New issue 47(19) November 2021. A rich literature considers the experiences of global migrants across diverse environments. This special issue explores such experiences with a focus on inequality between migrants and host populations in countries of settlement. It asks: why are economic inequalities between these populations deeper and more persistent in some situations than others? How has ‘integration’ in this sense varied across groups and contexts and over time? What factors contribute to such variation? What policies and programmes facilitate better and more equitable economic outcomes for migrants? The issue approaches these questions through a focused and comparative study of two migrant populations (Vietnamese and Afghan) in four Western countries (Canada, Germany, the U.K., and the U.S.). It pays particular attention to involuntary migrants, who fled conflict in their home regions beginning in the 1970s–1980s.

New issue: Externalisation / Mobility and agency in protracted displacement, Forced Migration Review (FMR) 68. The issue includes a major feature on Externalisation. With States increasingly taking action beyond their own borders to prevent the arrival of refugees and asylum seekers, we examine the consequences for protection. A second feature focuses on mobility and agency for those living in protracted displacement, produced in collaboration with the TRAFIG research project. Articles available in French here.

Dedeoglu, S. (2021). Cultivating Precarisation: Intersecting Vulnerabilities of Syrian Refugees in the Turkish Agricultural Sectorv. Work, Employment and Society. This article explores how the vulnerabilities of Syrian refugees influence their integration into Turkish labour markets, in particular the agricultural sector. ‘Vulnerable integration’ refers to the inclusion of the most vulnerable migrant labour – women and children – in the face of rivalry among different segments of the precariat to obtain existing agricultural jobs. With a focus on intersectional vulnerabilities and the feminisation of precarisation of Syrian labour in Turkey, the author aims to highlight the interconnectedness between women’s production and social reproduction by developing a sociological multidimensional dynamic way of thinking about the integration of Syrian refugee labour in Turkey’s seasonal agricultural labour markets.

New publication: Poetry and Settled Status for All: An Anthology (CivicLeicester, 2022) is now available. Poetry and Settled Status for All presents 114 poems and short prose pieces from 97 writers from around the world, exploring themes that include lived experience of migration, refugee and undocumented migrant experiences, and the hostile environment. The anthology features contributions from seasoned writers with many publications to their names alongside emerging voices and has been described variously as “powerful,” “thought-provoking,” and “effective”. The volume is inspired by and builds on how, around the world, campaigners are asking governments to give Settled Status, Indefinite Leave to Remain and humane pathways to citizenship to all in their jurisdictions who need such status. You can also watch a video of readings by the authors held on December 21, 2021.

Novak Djokovic was detained for five days – refugees in the same hotel have been there for years, Melissa Gater, The Conversation Canada, January 24, 2022. Djokovic’s visa debacle and short stay in the Park hotel is a stark contrast to the plight of the 30-plus asylum seekers also detained there. Journalists flocked to the hotel to cover the story of the detained tennis player but paid little attention to Djokovic’s neighbours, some of whom have been there for more than two years. The author spotlights the plight of those detainees and highlights how governments could find loopholes in laws and conventions to detain asylum seekers indefinitely.

How Canada should be preparing to help young Afghan refugees, Emily Pelley, The Conversation Canada, January 16, 2022. The government of Canada has committed to bringing 40,000 Afghan refugees to Canada. To date, almost 6,500 have arrived since August 2021. The author uses her focus on young refugees from Syria to draw some lessons learned and better understand how Canada was prepared to receive and support refugee children and youth coming from countries devastated by war and armed conflict. She focuses on Halifax, N.S., as a case study to show how smaller urban centres supported the integration of young refugees.

The value of social structures for new refugees: Lessons from the Syrian experience (podcast), this Policy options Podcast episode three individuals who have deep experience in refugee migration and settlement in Canada are interviewied.