You can download the digest in PDF format here: RRN Research Digest No. 102 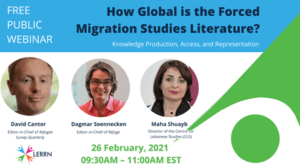 Krause, U. (2021). Colonial roots of the 1951 Refugee Convention and its effects on the global refugee regime, Journal of International Relations and Development. This article complements Postcolonial and Ignorance Studies and uses online archival research to explore debates among state delegations about the Convention’s refugee definition and ‘colonial clause’ at the founding conference (2–25 July 1951). It illuminates delegations’ strategic production of knowledge and especially ignorance—meaning the construction of issues as irrelevant—leading to the prioritization of ‘the West’ over ‘the Rest’. Colonial and imperial states generally dominated debates while colonized ones were excluded, and thus silenced. Despite broad support for the universal refugee definition, several powerful delegations demanded its limitation to Europe and therewith strategically subordinated and ignored the ‘Other’ refugees and regions in pursuit of geopolitical interests. They thus made the colonial ‘Others’ irrelevant in the creation of ‘international’ refugee law. The author argues that these debates rendered the Convention’s founding ‘colonial-ignorant’, with lasting effects on the regime’s functioning. Read in full here.

Abdelaaty, L. (2021). The relationship between human rights and refugee protection: An empirical analysis. International Journal of Human Rights. What is the relationship between a government’s respect for the rights of its citizens and that government’s regard for refugee rights? On the one hand, we may expect that a country with high human rights standards will also offer a higher quality of asylum. For example, domestic laws that protect citizens’ rights may be extended to refugees. On the other hand, there are reasons to theorize that a country with high human rights standards may offer a lower quality of asylum. For instance, governments may claim that protecting citizens’ well-being necessitates the rejection of refugees. The author analyses a global dataset drawn from reports by the US Committee for Refugees and Immigrants to explore these questions. The data reveals that the relationship between citizens’ rights and refugee rights is modified by economic conditions and the size of the refugee population. Moreover, some domestic rights (i.e., freedom of movement, labor rights) may increase protections for refugees, while others (i.e., the rule of law) may decrease them. Learn more here and read a full-text version of the accepted manuscript on ResearchGate here.

Hawkins, M. M., Schmitt, M. E., Adebayo, C. T., Weitzel, J., Olukotun, O., Christensen, A. M., Ruiz, A.M., Gilman, K., Quigley, K., Dressel, A., & Mkandawire-Valhmu, L. (2021). Promoting the health of refugee women: A scoping literature review incorporating the social ecological model. International journal for equity in health, 20(1), 1-10. There is a lack of comprehensive synthesis regarding how factors interact to influence the health of refugee women. The authors conducted a thematic analysis of the literature to elucidate how providers can work with refugee women to prevent adverse health outcomes and intervene at multiple levels to improve their health outcomes after resettlement. They reviewed peer-reviewed literature from 2009 to 2019 from Google Scholar, JSTOR, Global Health, PubMed, CINAHL, Sociological Abstracts, and Social Service Abstracts. Amongst the findings was that refugee women are vulnerable to violence during migration and typically have high rates of post-traumatic stress disorder. There were also concerns of secondary victimization by providers after resettlement. Read the open access article here.

Kikulwe, D., Massing, C., Ghadi, N., Giesbrecht, C. J., & Halabuza, D. (2021). From independence to dependence: Experiences of Syrian refugees. International Migration. This paper focuses on the qualitative findings from a mixed‐methods study of male and female Syrian refugees’ educational and employment experiences who settled in Regina, Canada. Canada admitted over 40,000 Syrian refugees who settled in 350 communities across Canada, including many smaller, non‐traditional refugee‐receiving centres. This influx necessitated the expeditious development of additional services as well as a re‐allocation of local resources. The findings demonstrated that as participants moved through each of the successive phases of migration, they perceived a shift from independence to government dependence. While back home, participants had identities as “hard workers”, they found that their experiences and credentials from their home countries were devalued and that learning English was a prerequisite for employment. Read the open access article here.

Kirandeep, K. (2021). Special Issue – In Their Own Voices: Making Visible Lives of Refugee Women In Kuala Lumpur. Displaced Voices: Volume 1 Issue 2. Working in collaboration with Kiran Kaur, Amin Kamrani, the Living Refugee Archive and contributors, this special issue is a collection of papers written by and with refugee women based in Kuala Lumpur, Malaysia, with a foreword from Professor Nergis Canefe based at the Centre for Refugee Studies at York University, Canada. The final contribution is visual rather than written and aims to highlight the spaces, actions and voices of refugee communities without emphasizing a victimhood narrative or imagery. All contributors to this project were participants in a doctoral participatory action research (PAR) project in Kuala Lumpur, Malaysia. In this issue, the authors explore what inclusive publishing might look like and rather than speak for refugee communities, instead, they speak together. This issue of Displaced Voices (ISSN: 2633-2396) can be read in conjunction with Amin Kamrani’s 20/20 Virtual Exhibition of photographs taken during the 2020 pandemic. Access the volume here.

United Nations Department of Economic and Social Affairs, Population Division (2020). International Migration 2020 Highlights. The United Nations Department of Economic and Social Affairs (UN DESA) published its 2020 revision of International Migration Highlights, presenting key facts and messages regarding international migration globally and policies promoting safe and orderly migration. The latest data shows that 281 million people (3.6 percent of the world’s population) are living outside their country of origin. In 2020, almost 50 percent of all international migrants and about half of all forcibly displaced persons, were women and girls. Read full report here.

Why do we need further research on internal displacement? by David Cantor, Refugee Law Initiative, February 3, 2021. In this new blog post the author argues that recent reviews of the research literature on internal displacement identify many central themes around which significant gaps in our knowledge exist. In other words, the lack of research on IDPs does not indicate that we know this topic too well already – in fact, quite the contrary. Read more here.

Meet Gary is a website, www.MeetGary.ca, created by a team of refugee lawyers and researchers to help guide refugee claimants through the Canadian Refugee Board process. With the support of the Law Foundation of Ontario, it is now available in French, Spanish, Arabic, Farsi and Chinese.

UNHCR Virtual Conference: 70 Years Protecting People Forced to Flee. The virtual academic conference took place on January 18, 19, 21, and 27 to mark the 70th Anniversary of the founding of the Office of the United Nations High Commissioner for Refugees. On January 21st, LERRN hosted two North American panels. These panels considered North American perspectives on the “who, what, and how” of realizing protection and solutions, both within North American and through North American engagement in the global refugee regime. You can now access the summaries and view the recordings of the panels here: