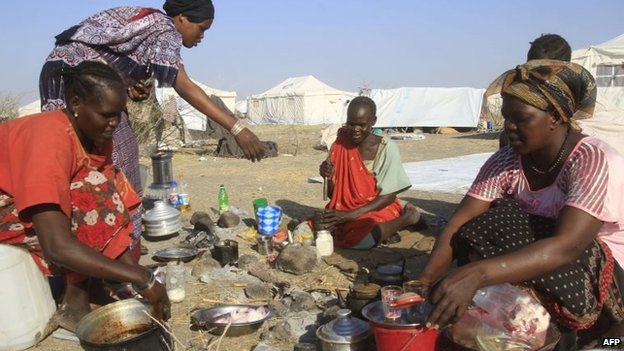 A third of South Sudan’s population is now in “urgent need” of food, the UN says

The United Nations has said it estimates 3.7 million people are in acute need of food in South Sudan as a result of the civil conflict there.

The UN’s humanitarian co-ordinator in South Sudan Toby Lanzer told the BBC $1.3bn (£790m) was needed to deal with the crisis.

Violence broke out in South Sudan on 15 December, starting as violence between rival army factions.

It has now killed thousands of people and displaced around 860,000.

Mr Lanzer said it had also had profound effects on the country’s economy. “Largely because markets have been disrupted, people have been living under extreme duress, people aren’t able to move as they normally would,” he said.

“Nobody in mid-December… could have foreseen the scale of the emergency that now faces us. We are doing everything we can to avoid a catastrophe,” he added.

The number of those needing food represented around a third of South Sudan’s population, he said.

He said that in the city of Malakal, some civilians had stormed a warehouse where aid was being kept and “helped themselves”.

“Most of the looting was done by people who were so desperate for the aid that they simply couldn’t wait,” he said.

He said over that of 863,000 people who have been displaced; 740,000 of them are still in South Sudan and the others have left for neighbouring countries.

A fragile ceasefire was agreed last week between the two sides ahead of a second round of peace talks due to start on 7 February.

However, earlier this week, the medical charity MSF says 240 of its staff in South Sudan were forced to flee into the bush because of continuing insecurity.

MSF said the workers were among thousands of people trying to escape fighting in Unity State between government forces and rebels.

The fighting was sparked by a political dispute between President Salva Kiir and his former deputy Riek Machar on 15 December.

Although both men have supporters from across South Sudan’s ethnic divides, fighting has often been communal, with rebels targeting members of Mr Kiir’s Dinka ethnic group and government soldiers attacking Nuers, the group from which Mr Machar hails.

A ceasefire was agreed after talks between the two but fighting has continued in some areas and correspondents say it could be further jeopardised by treason charges against some of Mr Machar’s allies over what authorities say was a “coup attempt” in December.

Fighting erupted in the South Sudan capital, Juba, in mid-December. It followed a political power struggle between President Salva Kiir and his ex-deputy Riek Machar. The squabble has taken on an ethnic dimension as politicians’ political bases are often ethnic.
Accessed originally from the BBC here