You can download the digest in PDF format here: RRN Research Digest No. 112 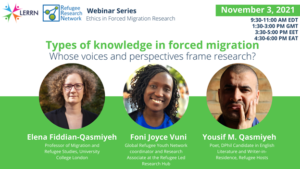 Istaiteyeh, Rasha (2020): The Impact of COVID-19 on Syrian Refugees in Jordan. World Refugee & Migration Council (WRMC). Research Paper. This report analyzes the economic implications of COVID-19 for the Jordanian economy, including its diverse economic sectors and, most importantly, on its levels of poverty and inequality. It also surveys Jordan’s policies toward Syrian refugees, including provision of Executive Summary 6 health, education and other essential services, as well as the impact on the livelihoods of Syrian refugees in Jordan. The report also considers the important question of whether present and future international assistance can mitigate the impact of COVID-19 on the Jordanian economy and specifically on the ability of Jordan to continue hosting Syrian refugees

Khasalamwa-Mwandha, S. (2021). Local Integration as a Durable Solution? Negotiating Socioeconomic Spaces between Refugees and Host Communities in Rural Northern Uganda. Sustainability 13(19). With a growing number of displaced people, there is a need for robust approaches to coping with displacement. Uganda has a progressive refugee policy that promotes freedom of movement and the socioeconomic rights of the refugees. Specifically, refugees are often allocated land to settle and cultivate rural settlements, and the integrated social service provision facilitates interaction with host communities. However, there remain challenges in creating sustainable livelihoods for refugees in rural settlements. There exist significant tensions over shared resources such as land, water, woodlots, and grazing areas. Based on a survey of 416 households and key informant interviews with South Sudanese refugees in selected settlements in the Adjumani district, the paper highlights refugees’ access to social and economic spaces as critical pathways to sustainable livelihoods and integration. Uganda’s progressive policy expands the opportunity space; however, refugees still encounter significant barriers in accessing the socioeconomic spaces.

New Report: Intentional Connections for Welcoming Communities Improving Settlement for Privately Sponsored Refugees in Ontario through Settlement-Sponsor Collaboration. Allies for Refugee Integration, 2021. Allies for Refugee Integration has been about dreaming of a future where privately sponsored refugees have a consistent and smooth settlement journey in Canada. With the support of hundreds of stakeholders and dozens of partnerships. From 2018 to 2021, ARI and its partners focused on creating more welcoming communities for privately sponsored refugees. Project partners, OCASI and Refugee 613 had both observed gaps in knowledge, relationship and operations between private sponsors and the formal settlement sector; gaps that often become cracks that negatively affected the settlement journey of refugees. The aim of this report is to generate and test adjustments to the user experience for both settlement workers and sponsors, with the goal of improving access to support for refugees.

New Report: “I Didn’t Feel Like a Human in There” Immigration Detention in Canada and its Impact on Mental Healthv, Human Rights watch, 2021. Despite its reputation as a refugee-welcoming and multicultural country, Canada incarcerates thousands of people on immigration-related grounds every year, including people who are fleeing persecution, those seeking employment and a better life, and people who have lived in Canada since childhood. Figures from the Canada Border Services Agency (CBSA) reveal that the number of immigration detainees incarcerated in Canada has increased every fiscal year between 2016-17 and 2019-20, peaking in fiscal year 2019-20 with a total of 8,825 people in immigration detention. For many detainees, not knowing how long they will be detained causes trauma, distress, and a sense of powerlessness. Detention can exacerbate existing psychosocial disabilities and frequently triggers new ones, including depression, anxiety, and post-traumatic stress. The authors expose the mental health effects of the Canadian detention system and recommend the gradual abolition of Immigration detention in Canada. The report is available in a report format as well as a public education document.

Petra Molnar, ‘Inside new refugee camp like a ‘prison’: Greece and other countries prioritize surveillance over human rights’, The Conversation. 28 September 2021. During her visit to Samos, Molnar was told about refugees being intercepted by Greek authorities without being given the opportunity to claim refugee protection or even speak to a lawyer. Without these opportunities, they are often returned to Turkey.This practice is known as “pushbacks” or “interceptions at sea,” where boats of people seeking refugee protection are returned to Turkish waters by Greek and European authorities without being allowed to claim asylum. This process is facilitated by various surveillance technologies. Read more.

Mandy Hughes, Barbara Rugendyke and Louise Whitaker, ‘‘It’s given me love’: connecting women from refugee backgrounds with communities through art’, The Conversation, 4 October 2021. Women from Afghanistan, Myanmar, Syria, Iraq and other countries are settling in regional Australian communities. Adjusting to life in a new home involves facing many challenges — but finding a sense of belonging can help the settlement process.For those who have experienced trauma, including women from refugee backgrounds, creative arts can enhance well-being, improve social connections and promote a sense of belonging. Connecting through creativity also builds bridges, addressing fears of newcomers and communities around refugee settlement. Read more.

Robert Falconer, ‘Why Joe Biden should emulate Canada and go big on private refugee resettlement’, The Conversation, 12 October 2021. As attention turns from the evacuation of Afghanistan to the arrival of refugees, U.S. President Joe Biden has an opportunity for large-scale engagement of the American public in a deeply personal fashion. If Canada’s history is any indicator, the capacity of private American citizens to resettle refugees is large and untapped. It may even bridge the divide over immigration in the United States. Read more.

Caitlin Katsiaficas (2021). Investing in refugee talent. International Centre for Migration Policy Development. 13 October 2021. In the ’global race for talent,’ countries are seeking to attract the best and brightest – and often look to international students as a significant source of future talent. Meanwhile, universities, student groups, and other stakeholders are increasingly spearheading initiatives to support the enrolment of refugee students through scholarship and sponsorship programmes. This commentary argues that teaming up to thoughtfully incorporate international refugee students into European talent management initiatives can be a win-win. Read more.

New Blog: Cristiano d’Orsi, Analysing access to healthcare for refugees and migrants (“mixed migrants”) in South Africa and Kenya: protective laws and progressive policies clashing with daily reality, Refugee Law Initiative, October 18, 2021. In this blog, the author analyses whether discrimination is permitted, whether it happens anyway, and what could be done to combat intolerance against refugees and migrants in South Africa and Kenya in terms of their access to healthcare in these host countries. He chose these two countries because they are among the African countries with the longest history of hosting aliens. Read more.

Watch virtual panel: research launch: thinking long-term about syrian refugees in jordan, lebanon and turkey (September 9, 2021), World Refugee and Migration Council. This panel discussion to launch the three reports and hear firsthand from the researchers about the economic impact of the refugees on the three countries and their recommendations for mobilizing additional international support.

Researching Internal Displacement: This platform connects researchers, practitioners, policymakers, students, artists and people from displacement-affected communities with cutting-edge research, analysis, creative materials and events on internal displacement. The site features working papers, blog posts, and many other resources to showcase and push forward new research. We welcome your contributions too!

Internal Displacement, Conflict and Protection: This is a free six-week online training course that provides your staff, counterparts and the general public with a comprehensive introduction to key issues in this field. These resources respond to the UN High-Level Panel on Internal Displacement call to strengthen ‘effective use of internal displacement data and analysis’.